Stephen Webster “Murder She Wrote, with a Cup of Tea.” 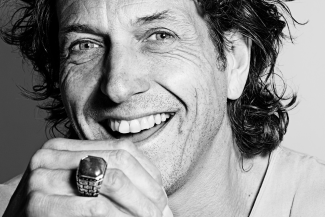 Stephen Webster is one of my favorite jewelry designers.  I know I say this a lot, but truly this British jewelry designer is fearless and makes a dramatic statement in his jewelry designs.  His jewelry has been described as glam-rock, edgy and transgressive.  He is the jeweler to the stars among them being Christina Aguilera (the 2009 face of Stephen Webster), Madonna, Sir Elton John and Halle Berry, just to name a few…. Note to self…my next paycheck goes to S.Webster, FUN FUN FUN!!!  While I was floating through the Couture show at the Wynn in Vegas, marveling at all the beautiful jewels, I approached an unexpected aura coming from a very dark mysterious booth.

As I got closer I could see the sparkling diamonds and colorful array of stones from blue sapphire, the greenest of emeralds, opals and onyx luring me in. As I walked closer I realized it was the one and only Stephen Webster.  Ah, where to begin.  There were pendants with spiders adorned in blue sapphire and black diamonds, a lobster ring with a coral head with brown and black diamonds forming the body. I mean seriously, no one else could create creatures in such a beautiful and sophisticated way.  It gets better – when I entered the inner sanctum where customers are invited to view the collections and invest in pieces of art, what do I see? A bold neon sign that says “Murder She Wrote.” Webster has created/reinvented a genre to take you through this new Fall Collection. When I asked about this, I was told, “ his theme is Murder She Wrote – with a cup of tea.” Angela Lansbury wishes she got to wear these pieces…  Leave it to an Englishman to present jewelry with such a morbidly sexy statement.

Stephen’s work is inspired by his life experiences such as films, the sea, tattoos and broken glass all the while incorporating traditional jewelry design. The jewelry collection names are just as eccentric.  They include Crystal Haze, Jewels Verne, Poison Ivy and Seven Deadly Sins.  He creates his masterpieces in gold, silver, palladium and titanium for men and women.  Each of us can be adorned in a piece to fit our style and our budget.  Those of us that live in Los Angeles can find their inner Sherlock at his new U.S. flagship store on Rodeo Drive.  It’s not just an ordinary jewelry store; it is a gallery of art.  Live the “Show” that is Stephen Webster and admire these most amazing jewels.